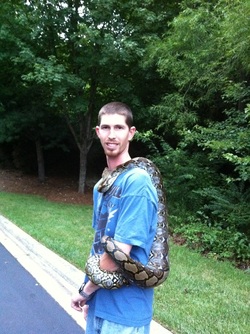 Ray Curran was raised in Norfolk, VA until the age of 6. Then moved to
Moyock, NC to discover his passion for snakes. As a young boy, he loved
to explore outside looking for creepy crawly  animals. At the age of 10,
he started a research of his own. Catching snakes and  labeling them to
see where they roamed around in his neighbourhood. At the age of 19,
he graduated from Currituck County High School and joined the Navy (in
July  2002) to sail around the world and serve his country. From Italy, Spain, Greece, UAE and various other countries. Then decided it was time for a  career change, so he got out of the Navy in July 2010 and moved to Mooresville, NC to attend school at NASCAR Technical Institue to become a Automotive Technician. Currently in the Navy Reserves located in Charlotte, NC. Now that he has setteled in he feels like it is time to give back to his community once again.